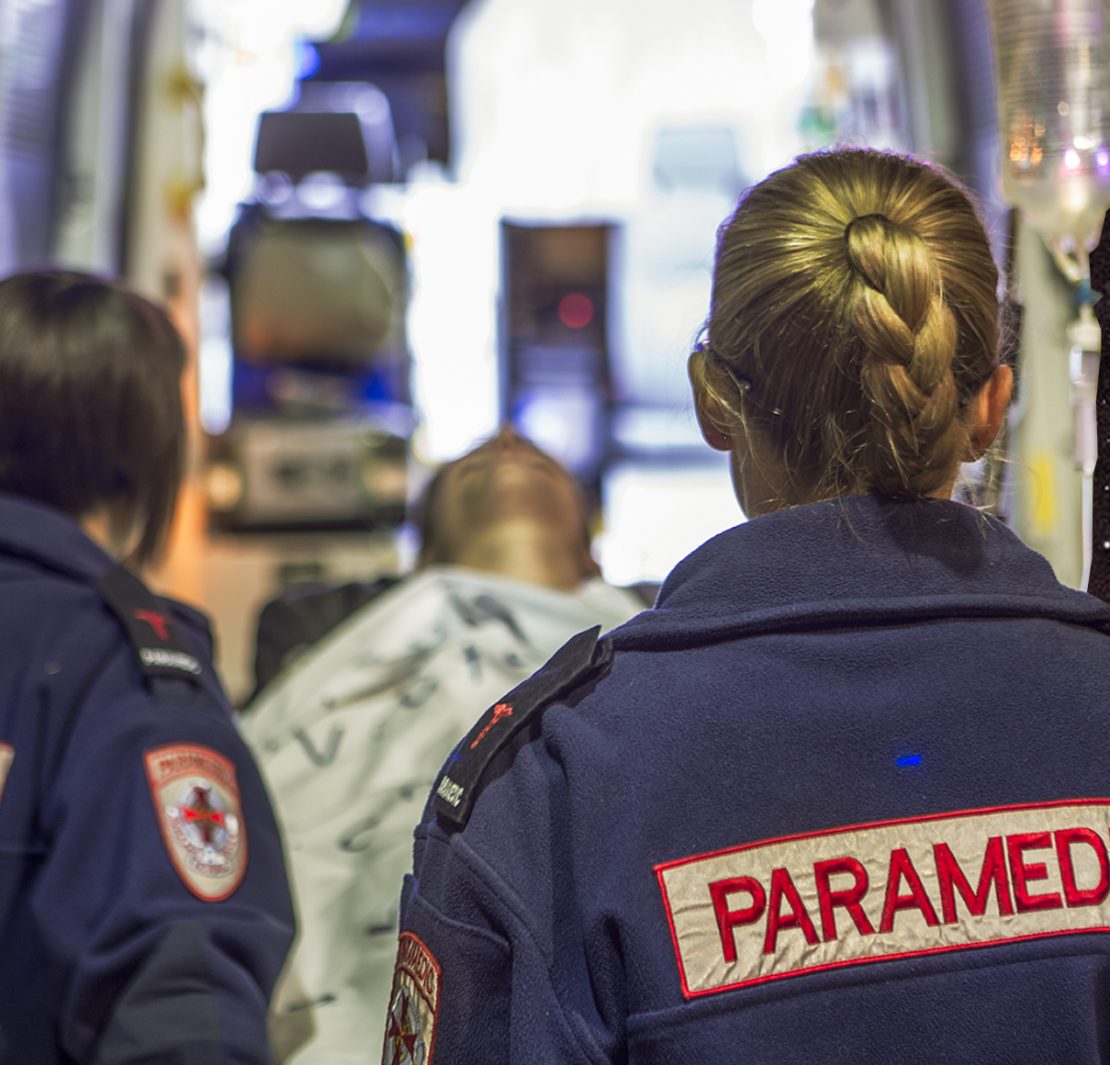 This is a transcript of a Paramedic (24 years old) in Melbourne.

FN: How are you feeling, do you want to reschedule this interview?

My eyes are burning and I feel slightly nauseous from lack of sleep and too much coffee! It was a flat out night, 15 hours with just a 30 minute break early in the night where I managed to grab a meal.

I was lucky though, I heard many of the cars [ambulances] didn’t get a break at all. The hospitals were struggling [last night] and the ambulance service was running around all night, chasing all sorts of calls until the morning finally arrived and it died off a bit. There are a lot of very tired paramedics out there this morning!

But of course, let’s do the interview while it’s fresh.

FN: Could you run us through your night?

The first 7 hours were fairly usual.

My partner and I did no really major jobs of note, just an assortment of miscellaneous calls – a regular caller who is a chronic alcoholic and has taken to ringing for the most ridiculous reasons, an old girl in a nursing home with a fever, a drunk young man with laceration to the leg, a man with angina, a man who had been assaulted the day before and now had two black eyes, a woman with anxiety, another woman hyperventilating.

At midnight I had my first notable patient.

It was a young man was who lying on his back on the footpath outside a drive-through bottle shop that had closed for the night.

When we arrived there were two men crouched over the figure. He wasn’t moving.

We had been dispatched to the case as a Signal 2 job and the data terminal just read “Unknown problem – isn’t standing or talking” – these jobs are usually psychiatric issues, alcohol related or drug affected. Sometimes all three!

We parked in the driveway and flicked on the spotlights to light up the scene a little better. As we got out of the ambulance, a police van pulled in behind us – my partner and I exchanged looks.

There had been no mention of the police being dispatched on the data terminal. Sometimes multiple people will call for help when something untoward happens in the street – some people will call the police, some will call an ambulance. Sometimes the two services don’t communicate very well and we both arrive looking surprised to see the other.

My partner headed over to talk to the police and I grabbed the my bag and walked over to where the people were holding the young man down.

I could see straight away that he had his eyes open, was clearly breathing and appeared relatively calm. Then I saw the blood on the ground around his head. I asked the two guys what had been going on and they stated this guy had been “going crazy” and had hit his head on the ground.

My first thought was that perhaps there had been a fight between them and they had been holding him down until the police arrived.

The police officers and my partner walked over so I asked the two guys to get off him. I remember one of them looking at me for an instant as if to say “are you sure?” – then they let him go and stood back. For a few seconds all was quiet… then all hell broke loose.

The guy let out a scream like a banshee, arched his back and began repeatedly smashing the back of his head into the concrete.

You could literally hear his skull cracking.

For a moment I think nobody could believe what they were seeing – then we all jumped in and tried to stop him. While the others restrained his arms and legs, I tried to hold his head still. With all the blood in his hair his head was impossible to hold – I ended up grabbing a fist full of his hair with one hand and placing my other hand under his head.

He violently fought against us and was arching his back, easily lifting the two police officers that were trying to hold him down.

My partner ran to get the bed and restraints out of the truck. Then suddenly he relaxed, stopped fighting and was quiet again, lying there like he was looking up at the stars, blinking occasionally but not saying a word.

A few tense moments later and we had him restrained to the bed for his safety and ours. I never like doing that but this guy was clearly doing himself some major harm.

We loaded him into the back of the ambulance and I set about trying to take some vital signs. My partner placed an oxygen mask on him and I passed over a pad and bandage for his head which was steadily turning the pillow red.

Suddenly and without warning, he fired up again, screaming, kicking and writhing.

The two police officers who had been lurking in the doorway of the ambulance piled in and we all struggled to hold him down again. He managed to dislocate his shoulder trying to sit up and get out of the restraints – he was unbelievably strong.

Because my hands were somewhat full, my partner notified the hospital, which was only a few minutes away, to warn them we were coming. He went from perfectly calm to crazy mode several more times over the next few minutes until we handed him over at the hospital. A few minutes later and there were six security staff, four nurses and several doctors all struggling to manage him.

He would need to be sedated, restrained and closely monitored for many hours until the methamphetamine was out of his system and they could work out how much damage he’d done.

When I finished writing my case notes, I went out to where my partner was still cleaning up the blood in the ambulance. Not long after, the two police officers walked back outside. I thanked them for their help, we bade our farewells and we all drove back out into the night.

Only another six hours of nightshift to go. Next we went to see Paul. It seemed he had been working on a car when an engine part had dropped on the back of his hand, which crushed and sliced the middle two fingers on his right hand. He couldn’t close his hand into a fist. This meant likely tendon damage in itself but when I inspected the wound with a torch I could see right through to the bones and damaged internal structures.

Paul was in for a long night at hospital while the surgeons attempted to reattach his tendons and get his hand back into some kind of working order.

The next few hours were much like the first of my shift.

And then finally, it is 05:00 am and we are driving back from hospital when we come across a traffic accident.

A taxi has failed to negotiate a gentle curve in the road and has struck a power pole. There are no other emergency services on scene and we have not heard any ambulance vehicles being sent to this crash.

We radio in as we do a U-Turn.

For a suburban street this is a reasonably big hit. The taxi is twisted out of shape and the power pole has clearly made it nearly all the way through the engine bay to the firewall.

When we look in the vehicle, it’s a mess.

There is no obvious blood and nobody in the front or back seats.

I always check the floor too, as people can end up in all sort of odd place in a crash.

The airbags have gone off. There are no skid-marks on the road and major damage to the wooden power pole at about head height. This car was airborne after hitting the concrete curb.

A taxi driver was sitting on a low brick fence talking on a mobile phone and I went over.

After a quick assessment, he’s alert, apparently uninjured and doesn’t want my help thanks very much (not what he actually said). The driver claimed to be at the end of her shift and said he had “lost concentration”.

I have seen many accidents where the car is wrecked and the people inside are fine, but I’ve also seen the opposite, where the car looks fine and the person is critically injured.

I persuaded the driver to go to hospital for a check-up, but despite careful looking, I found not a scratch on her. No seat belt stripe (the tell-tale diagonal red bruising), no back or neck pain, no glass shards in her hair, no cuts on the hands or pain in the chest.

After this… We arrive back at branch, restock a few things and the next shift crew are waiting. So all in all a big night. But now I am bone tired and need to sleep!

FN: My next question is about salary. How much does a paramedic get paid?

At the moment I work in Melbourne , Australia, where the annual income for a fully-qualified entry level paramedic is about 60K. But this can end up well over 70K once penalties like night loading and overtime are added on.

FN: What’s a common call out that frustrates you? Is it when people call for injuries that aren’t life threatening

I mean, I get frustrated when we are called out to a house where a baby has fallen out of a highchair yes. But, in general… people are in panic mode when they call an ambulance and it’s not our place to judge whether they are ‘over reacting’.

In the past 2 days I have been to 3 deliberate Paracetamol overdoses. These people had each taken between 50 and 300 paracetamol tablets. They all were trying to get the attention of somebody; a girlfriend, a husband, a son whoever. I am convinced that not one of these people actually wanted to die. I’m also sure it all seemed like a good idea at the time. Paracetamol is commonly ingested in the mistaken belief that it is a “safe” drug to overdose on. Its readily available, it’s cheap and it doesn’t do any harm. That’s frustrated me this week.

FN: Thank you for your time, I’ll let you go sleep.

Thank you! I hope I gave you enough. I guess the only other thing I’d like to add is that I love my job. It’s challenging, it’s not an office job and it’s really helping people

Life as a paramedic, explained